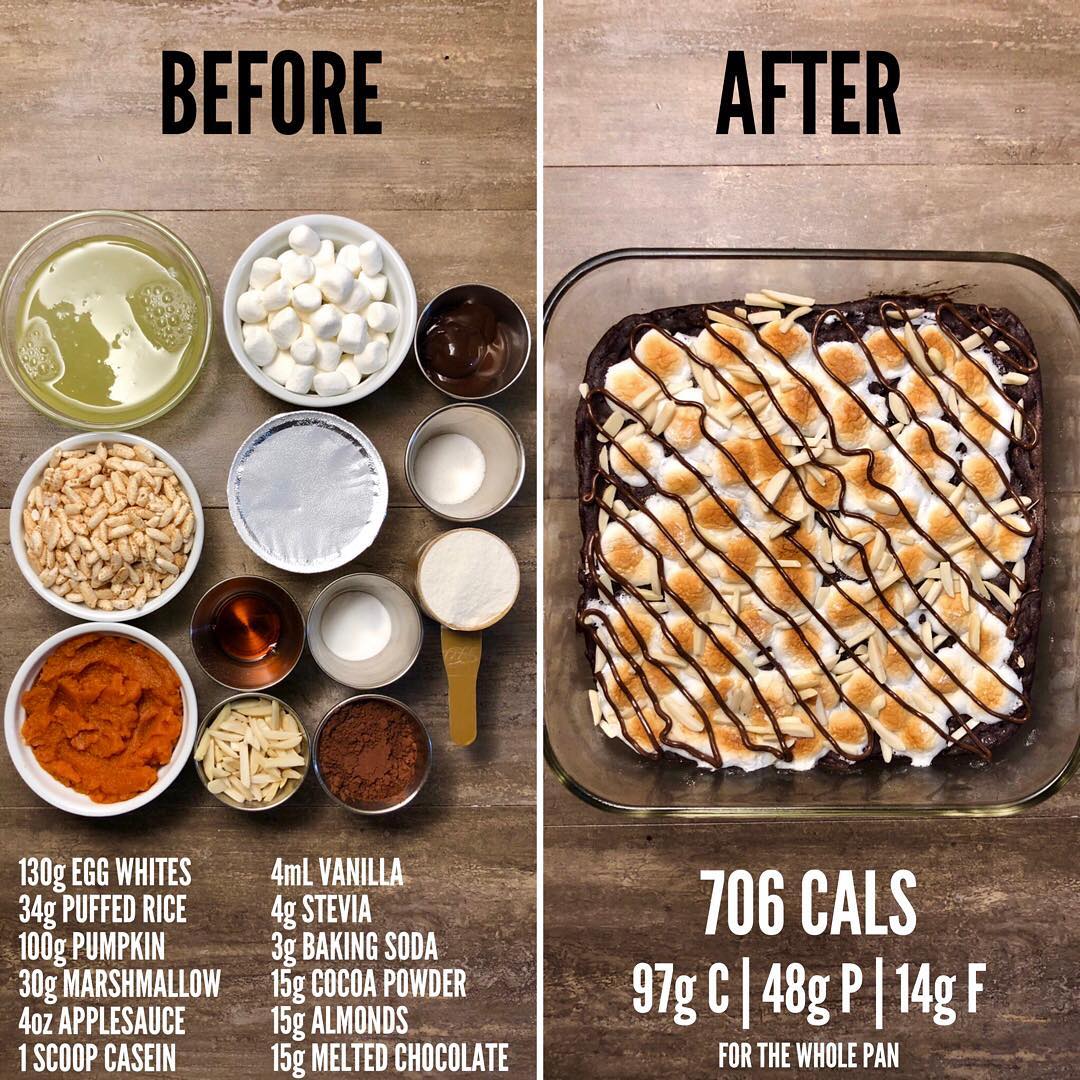 Rocky Road Dream Angel Bake. A lot of you guys have enjoyed the first iteration of this recipe, the Perfect Chocolate Dream Angel Bake and I wanted to experiment with it a bit to see what else could be birthed from the base recipe.
.
.
First of all, it’s called Dream Angel Bake because it’s not cake and it’s not a brownie and I didn’t know what else to call it because it’s good and super low calorie compared to its traditional counterpart. It’s kind of soufflé like, so I wanted to see what adding pumpkin and puffed rice would do. It was definitely more dense than the OG Dream Angel Bake but it is higher in calories. Worth it? Maybe. Nutrition information is for the entire pan. .
.
INGREDIENTS
130g (~3) egg whites
1 scoop (30g) casein
15g (3 tbsp)cocoa powder
34g (2 cups) puffed rice
4oz (1 cup thing) unsweetened applesauce
100g (~1/2 cup) canned pumpkin
4mL (1 tsp) vanilla
30g (2/3 cup) mini marshmallows
4g (2 tsp) stevia
3g (~1/2 tsp) baking soda
15g (1 Tbsp) slivered almonds
15g (1 Tbsp) melted chocolate .
.
PREPARATION
1. Preheat oven to 325F.
2. Beat the egg whites, vanilla, & baking soda until stiff peaks form.
3. Add stevia & cocoa powder.
4. Add in applesauce, casein & pumpkin.
5. Gently stir in puffed rice. Pour into a greased 8×8.
6. Bake 22-24 minutes.
7. Remove from oven. Turn oven to broil. Top with marshmallows and brown. Watch carefully.
8. Once cooled, top with almonds and chocolate. .
.
❓Can I use whey?
❗️No no no no no. If you want to bake with protein powder buy casein. It’s worth the investment. Some people say deserts are the driest places on earth. I say “Have you ever tried baking with whey protein?” Buy casein. Brand doesn’t matter. If one more person complains to me that they made one of my desserts with whey and it sucked when it called for casein I’m going to drink a gallon of bleach. ❓What is puffed rice?
❗️Rice that is shot with air. It’s like cereal. You buy it at the store. ❓I’m allergic to nuts. I don’t know how I could possibly make this recipe. ❗️Have you considered leaving them out?
❓I don’t have canned pumpkin, do I have to use it?
❗️No you can leave it out but it does make it more dense